For two nights and three days, our home became the refuge for my son, his wife and our 11-day-old granddaughter.

The pre-Christmas ice storm that almost brought Toronto to its knees had left them without heat and light. They live three blocks north of us where Danforth Avenue became the artery that marked light and life on our side of the Danforth versus dark and bleak on theirs.

The storm offered us a rare insight into the evolution of a new family, all the more because of my 35 years’ experience delivering babies .

I’ve learned that 10 to 15 days is about the time it takes to send a new mom ‘to ground.’ Eleven days of broken sleep, absolutely no time for hair care, let alone make-up, a bare nod to body changes as the belly shrinks and the breasts burgeon, even less to what you drape them in.  It is not a time when social interaction means much of anything.

My son and daughter-in-law were so hunkered down in those first few hours without power, they didn’t think to rush over. Instead, they toughed it out under layers of blankets as the temperature dropped. By 10 that night, realizing they were among the 300,000 people who were going to go through the night without power, they bundled up their baby and headed south to our island of heat and light.

We live in a two-storey loft condo, all open space except for the ‘man cave’ below ground level. That was where my husband and I repaired for the night, leaving the new family more room and easier bathroom access.  It had been a long day and we were all happy to turn in. The next morning’s dim daylight found my husband and I getting our coffee at our local cafe so we wouldn’t disturb our new sleeping family upstairs.

Later that morning at my clinic, “Do you have power?” and “Where did you spend the night?” were the greetings of the day. Half of us had stories to relay and as the magnitude of the outage sank in, there was a scramble to book hotel rooms or bunk in with family and friends.

Meanwhile, back at our home, a new rhythm established itself quickly and grew over the next three days.

I watched my grown son in action, changing diapers, attending to his ‘girls’, waiting for his baby time. There were the usual questions about sleep training, anxieties about knowing when she was distressed, and pronouncements about cluster-feeding when the baby clearly went through the night wide-awake. By the middle of Day Two, the miracle of the baby’s car seat as a cradle gave a new freedom to a weary mom. And it was amazing to realize how the noise of four adults banging out a meal in the open kitchen was in fact a soother for a sleeping baby not yet two weeks old.

We sang-along to Christmas carols, set up her own email account with her dad and emailed her a first Christmas album.

By Christmas Eve day, we were so confident about the routine that mom and dad took off on their own to the nearest Starbucks, leaving the baby and grandma to light the house and tree and finally, to do a diaper change of my own, my first in 35 years.

When they returned, it was with the news that they had power again.

Somewhat crestfallen, I watched them gather their girl and without delay, head home.

The reality of those first few days with a new baby strikes chords of memory with every mother. As I relayed this extraordinary story, one mom said, “You don’t know ‘til you’re past it. But it’s a year of work — not hard work  — just endless work. And a lot of it is drudgery and so boring with this little thing that just takes and takes. Add to that the sense of incompetency, because of course you are learning everything as you go.”

This had come in response to my observation that a Google search had popped up a sleep-training site on my computer when I sat down and opened it.

For me, it reflected how fiercely I’d hung on to my own sense of competency.

After all, the fear isn’t that you will be a bad mother. It’s that you will be an inadequate mother. Two weeks into motherhood, I had sat weeping at the notion that it was the middle of the afternoon and I hadn’t gotten away from simply tending to the baby to even get dressed and get on with my life — whatever that meant in that momentary despair.

My own mother came to us after three weeks. I was returning to medical school and she came to tend the baby on her own, stocked with bottled breast milk to last the day I returned. She stayed, I left.

My mother shouldered my leaving my child without complaint, as mothers do. I never doubted her ability and I never questioned if she even thought about the drudgery that would fill her days.

I have patients who take their new babies and themselves home to mothers. In that net, it is a collection of women who provide the extra hands and a wellspring of experience that supports the newly-minted mom. But even here, the spectre of incompetency can hang in the air. Is there enough breast milk? Is this a colicky baby who defies calming? Are you able to soothe the babe? Can you lean on your mate rather than be a daughter – still?

The extraordinary change we witnessed first-hand with my son is also his assumption of a hand’s on role. If he questioned what that role would entail as he went through the parenting sessions pre-delivery, he has surely delivered on the new model of what a dad is and what a dad does. Seeing his baby girl draped on his chest having dad-time, observing his newfound patience, and his pleasure-tinged calmness, overhearing the quiet conversations emerging in the dark between mom and dad from two floors below, all of these tiny vignettes affirm for us, the old parents, new insights about the ‘New’ new dad in our family.

Most dads will take the one to two weeks from their own jobs to weigh in and ease the settling in demands of their tiny infant. How that plays out has to be seen.

Watching my son dress his baby girl in matching sweats so they can watch the football game, fixing her in the crook of his massive arm, that was a moment. Watching him over three days and nights, that was a revelation.

We all get through these first two weeks of our first child’s life. Compared to the mushrooming demands of actually raising these little beings, it is breathlessly short in time.

Only an ice storm and with it, an opportunity for our home to be a refugio, brought all the memories back, unbidden.

Only the happenstance conversations along the way, tapped a similar wellspring of memories from a great and safe distance. 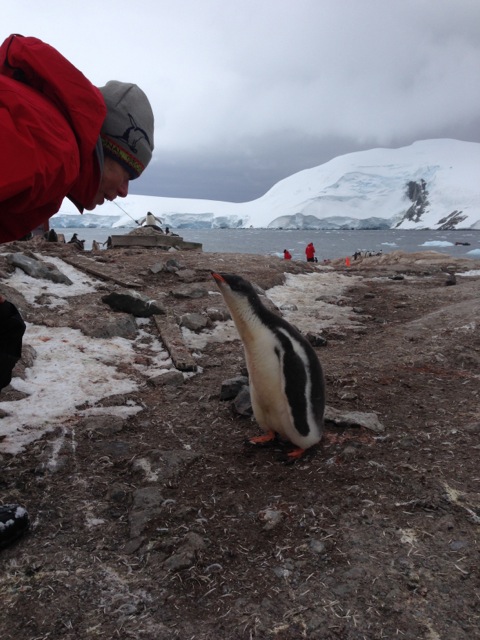