WE CAN ALL DO THIS

They're wondering if they have what it takes to run a marathon. The carb-loading session makes it look promising …

Women fill their plates at a Jean's Marines recruiting session. "My estimate is that two-thirds of those here might sign up," says an organizer.

The crowd of women assembling in the gymnasium of the Holy Rosary Parish Hall in Toronto are projecting an attitude of quasi-military toughness and determination. They march inside out of the bitter cold with pizza boxes, casseroles and cakes tucked under their arms and plop them down on a long table at the back of the room. At the urging of Dr. Jean Marmoreo who orders them to "get in line, get some food, and sit down" they start piling great hunks of lasagna, mounds of potato salad and heaps of vegetables on to their Styrofoam plates. "We don't call this eating, we call it carb loading," says one veteran runner to a novice, reassuringly.

There are between 150 and 200 people in the room, all but 10 of them women, who have come to this potluck dinner/recruitment meeting for Jean's Marines to decide whether or not to train for the next nine months for the Marine Corps Marathon in Washington, D.C., in October.

"I had to drop out last year for family reasons, but this year I will do it," says Elaine Cooper, a psychotherapist. She's watching the eating frenzy but abstaining from it herself. She wants to walk rather than run the marathon and will be aiming for a 14-minute mile. "Walking is important for cholesterol control, osteoporosis and weight loss. I can do this until I'm 75 so I have another seven years. I have a few goals and the marathon is one of the things I would like to do before I'm 70."

She plans to try out a few half marathons before the big one as part of her training. "I'm not nervous about the training. I'm a cancer survivor. Once you've faced death there's nothing left to be nervous about."

Before any fear can set in among the potential recruits, before any of the veteran marathoners start telling those disgusting stories about their blackened toenails and swollen feet, Dr. Marmoreo and her husband, Bob Ramsay, also known as the Jean's Marines Propagandist-in-Chief, herd everyone toward rows of yellow plastic bucket seats so the real show can begin.

One by one they drag up a handful of the marathoners who ran last year's race to persuade the crowd to sign on for this year. The most well-known of the group is Barbara Hall, a former mayor of Toronto and candidate in the next mayoral race. As she climbs the steps up the side of the stage, a great murmur goes around the room. "She looks great," says one woman in awe. And she does. She looks straight-backed and slim in a black pant suit with a white sweater. She's wearing high-heeled shoes that emphasize her height. She looks at least 10 years younger than her 56 years.

"I lost one pound and two clothing sizes," Hall tells the crowd. "I'm a slow runner, a bit like my talking style — slow and steady. My goal was to beat the straggler bus." This is the bus that goes out to pick up those who are still running the course after 5 1/2 hours. "I wanted to avoid the humiliation of arriving [at the finish line] on the straggler bus. … There were days when my platoon was training and we would say we'll beat the bus. On days that were not so good we would say let's refuse to get on the bus."

Her self-deprecating approach to her own achievement — she did finish the race ahead of the bus — charms the women in the audience. They are intrigued that a public person would take such a risk. "Imagine the fuss in the media if she had to take that slowpokes' bus," says one potential recruit to another. They are inspired by her obvious fitness and physical health.

"You look at the people who ran last year and they look like regular people," says Manon Gardner, a 40-year-old school principal, who plans to do most of her training while school is out in the summer. "So, we can all do this." She looks to her friend Linda Hamilton who is a part-time optician and a tennis player. "They are inspiring. We have a mutual friend who did it last year and she had never run a marathon before. I think it would be exhilarating," says Hamilton.

Jean's Marines didn't set out to be solely for women, but it seems to be women who turn out for the training. There are a few couples who ran last year and plan to do it again this year.

Chris Oliver isn't attached to anyone in the race, but decided he would sign up for training this year. He tried last year but injured himself while running and had to drop out of the final group that went to Washington. He's not put off by the idea of having to get up early and run in the dark in the cold or having to spend more time training as the race draws near. "What's daunting is the idea of running for 3 1/2 to 4 hours in the marathon itself," says Oliver. He is 43 and already runs a little to stay in shape. "Sure, you get in the zone, but it's hard to imagine now running for that long."

The crowd begins to disperse quickly after the presentation. They're all pumped up after the high-energy testimonials and the rousing chorus of the Jean's Marines fight song: "We're Jean's Marines we take no crap/So listen to our running rap./This marathon is ours to run/We'll kick some butt and have some fun."

Dr. Marmoreo flashes a photograph of a handsome young man in camouflage up on the screen at the end of the presentation and promises that everyone will get their own Marine at the end of the race. It becomes more clear now why it's mainly women who want to sign up. Ramsay urges them all to visit the dessert table and to eat up the cookies, brownies and Bundt cakes and to try some of the apple pie baked by the husband of one of last year's runners.

Barbara Hall tries to take a moment to carb load, but she can hardly get a forkful of pasta and tomato sauce into her mouth before she's being congratulated again on her successful run last year and complimented on her appearance.

"I'm still running at least three days a week," she says. This year she will be running for mayor and can't really commit to train for the Marine Corps Marathon, but she's going to run on Saturday mornings with the new group in training. "I like to run throughout the city. Max [her husband] and I go to a part of the city we don't know so well and we run. It's a good way to see what's happening on the streets."

The crowd thins out and everyone promises to sign up. "My estimate is that two-thirds of those here might sign up. But if this is like last year most of those who run will not have come to the potluck dinner," says Ramsay. "These will be people who hear about it through friends who were here tonight." He interrupts himself to point excitedly at a picture of a blond woman in an evening dress being flashed up on the screen. "That was taken the night before the race," he says. "Sorry, what was I saying? We're such a cult." 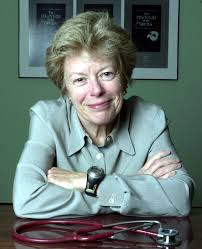 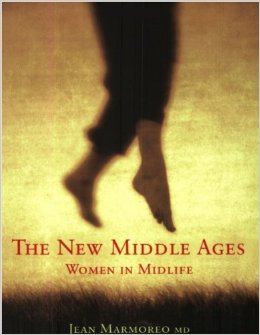 " Middle age used to be a
waiting room;
Now, it's a supermarket."
--Dr. Jean Marmoreo 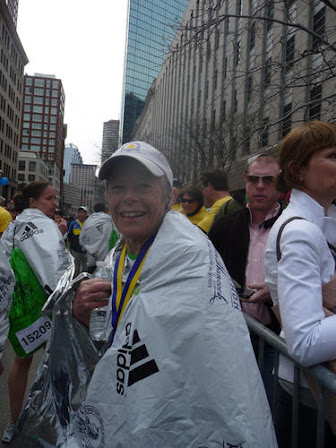 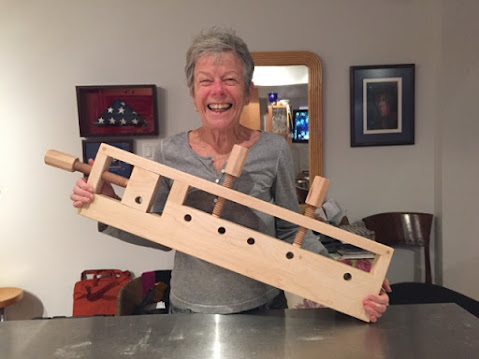